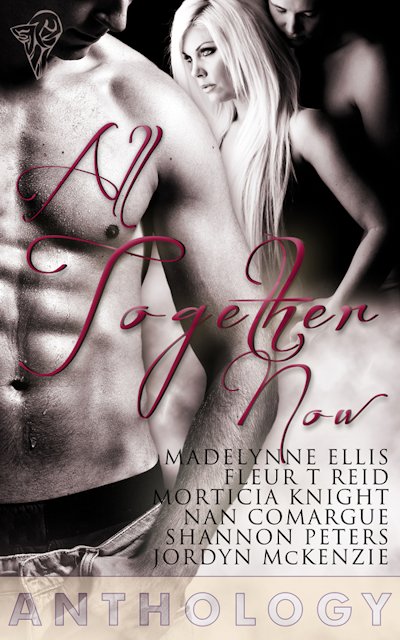 'Private Investigation' by Fleur T Reid
In another London, not entirely like our own, Miss Elizabeth James is one of the new Victorian working women.She answers an advertisement placed by inventor John Dermott for someone to bring order to the life of his companion, flamboyant private detective Lucien Doyle.She can sort out the shocking state of his paperwork, but the weird contraptions and unexpected explosions weren’t on the curriculum at the Metropolitan School for Shorthand. And while she can type, file and take dictation, she didn’t expect to have to take a string of apparently motiveless murders in her stride. She’s an expert at finding lost files, but how does one deal with the lost souls of the bewildered dead? Lilly’s life becomes even more confusing when she discovers that Lucien and John plan to do a bit of very private investigating-of her person.

'The Perfect Third' by Morticia Knight
Alexa is young, sexy and single in New York. She’s also alone. But she doesn’t want to date any more of the stuffy men she meets through her job at the law firm—she needs some excitement. When she meets hunky Lorne, a film score composer, at a premiere after-party, she can’t believe her luck when he asks her out. After an incredibly hot night of sex, when it seems that this is just the relationship she’s been waiting for, things inexplicably cool down. Does his best friend and roommate, the dangerously handsome Antony, have anything to do with it?One night the truth of Lorne and Antony’s relationship is revealed to Alexa, and she has a difficult choice to make. Is she willing to just let go and become their perfect third?

'Country Hearts' by Nan Comargue
Isabel Morgan’s experiment with city life is done. Her live-in boyfriend has just left her for a younger, more virginal model, and she finds herself in need of rescuing from the least likely of sources—the two rough cowboys she grew up with. Her ex-boyfriend made Isabel feel oversexed just because she wanted to fuck all the time, in fact it’s one of the reasons they grew apart, but the Armstrongs soon show how much they value her reappe.

'The Triumvirate’s Consort' by Shannon Peters
Evie Flint is feeling underappreciated in her professional life, and just a tad lonely in her personal life — but getting kidnapped by three gorgeous alien hunks who claim she’s their missing betrothed is not the solution she was looking for. Dane, Taz and Cort are surprised by their resistant consort and employ all their powers of persuasion in order to convince their woman to take them as partners. Evie has to decide — can she take them all?

'The Dare' by Jordyn McKenzie
It’s the final night of a weekend camping trip with a group of childhood friends. They are recent college grads, about to move forward to the next stages of their lives. What better way to end that chapter of youth and revelry than with one last weekend spent with your closest friends?But for Alexis, the events of that final evening cause her world to veer in an unexpected direction. What should have been a harmless game of Truth or Dare leads to an experience unlike any she has ever had before. The lines of friendship blurred and dormant desires awakened, Alexis faces a dare that will change her life forever. Torn between feeling shame and utter gratification, she must now decide whether to be led by her conscience or her heart.

Published: May 7, 2012
Publisher: Totally Entwined
All Together Now