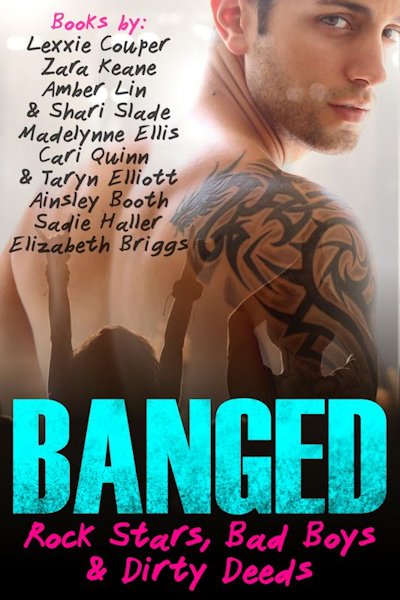 For a limited time only get 8 tales of hard-rocking, hard-loving, bad boys in one exclusive package. From the stage to the bedroom, these ROCK STARS are out to steal the show and your heart.

LUST’S RHYTHM (Heart of Fame) by Award winning author Lexxie Couper ~ She's the daughter of rock royalty. He's been warned off her by her famous father. But Jed Brody has lusted after Chloe Blackthorne for four years, and when Chloe lets him know the lust is entirely mutual, nothing will stop the bad boy of rock claiming her as his. Career be damned.

THE ROCK STAR’S SECRET BABY (Ballybeg Bad Boys) by USA Today bestselling author Zara Keane ~ When a beautiful former fling blasts back into his life, jaded rock star Darko Dunne’s peaceful seclusion on a private island comes to an explosive end. Faced with a band of ruthless criminals and a ticking clock, Darko and Muireann must pool their resources to rescue the baby he never knew he had.

THREE NIGHTS WITH A ROCK STAR (Half-Life) by USA Today bestselling authors Amber Lin and Shari Slade ~ Sparks fly when a hot rocker takes a good girl for a walk on the wild side…against the penthouse window, backstage, in the limo and on the elevator.

FORBIDDEN ROCK STAR (Red Hot Rock Rhapsodies) by NYT and USA Today bestselling author Madelynne Ellis ~ Nathaniel Darke: She knows just how to press all my buttons. Bass-playing bitch, crawling under my skin. I want to believe one good shag will cure me of her. But instead, I end up addicted. (This has since been retitled and released as Crazy Love by Clara Leigh.)

PAINKILLER (First Hit) by USA Today bestselling authors Cari Quinn and Taryn Elliott ~ He's the rockstar she doesn't recognize. She's the fighter he'll never forget. Nothing stings as much as the first hit...or hurts so good.

DIRTY (The Horus Group) by USA Today bestselling author Ainsley Booth ~ Wilson: Tabitha Leyton is a mess, but now she’s my mess. To the rest of the world, she’s a superstar. Secretly, she's a witness to depravity and a train wreck waiting to happen. But I can’t get her out of my head. And for one angry, secret night, we have each other in every imaginable way. The whole time, I know she’s off-limits. So in the morning, I’ll walk away. Officially.

MORE THAN MUSIC (Chasing the Dream) by Elizabeth Briggs ~ When geeky guitarist Maddie Taylor joins tattooed rock star Jared Cross’s band to compete on a reality TV show, their attraction becomes impossible to resist—but their forbidden romance might tear their band apart and cost them everything.